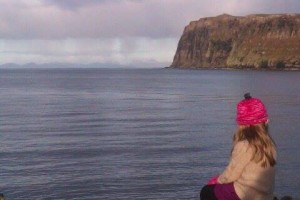 – the road from Glasgow to the Isle of Skye is one of the world’s magical voyages; through the forests by Loch Lomond, on into wild Glen Coe, in and out we go, winding past sudden sparkling lochs and dark, dramatic mountains, by Eilean Donan castle, to Kyle of Lochalsh and over the bridge to the ever-mysterious, Misty Isle. There is further, still, to go, skirting dark hillsides, tumbling down and struggling up through secret, hidden valleys, surprising, here and there, flocks of vaguely curious sheep, past remote settlements with enigmatic names such as Skulamus, Sligachan, Sluggans, Skinidin and Snizort. By the time you arrive on the little hill overlooking the big sea it will already be dark. You will need a torch for this final stage of the voyage. Open the gate, being careful not to lose it to the wind, and close it carefully once again behind you. Walk down the pebbled hill. You will here encounter an excitable Black Labrador, all snuffles, tongue and woof, eyes glinting in the torch beam, leading you downwards and on. On a clear night, you may notice in passing that the stars from here appear in all their glory and are utterly breathtaking. Nearly there now, nestled further down in the shoulder of the hill, overlooking the Little Minch and out towards the great Atlantic, lies a little wooden house, humble in the grandeur. You may switch off your torch now. Brightness burns in the window, next to a door which you do not need to knock.

This song was written for Sister Gill and the Dickson-Smith clan.

Visit us on bandcamp